Circa 1897 • Built by Bosch Brewing to house their Gilt Edge Bar. 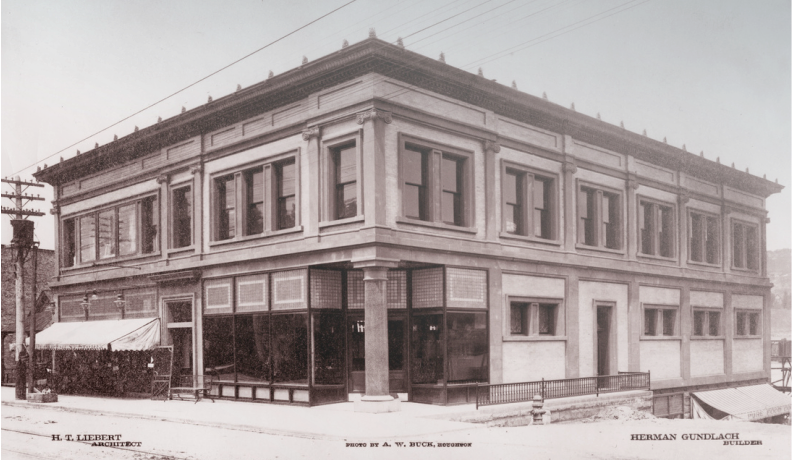 ﻿The corner entrance with the huge granite pillar was the bar... next to the bar was Miller's Department Shop (2 story with a mezzanine in between, their name can still be made out on the back of the building, painted in huge white letters)...  and down the hill on the lower level you can see the awning for Pure Foods Co. (there were other shops facing Lakeshore Drive but we aren't sure what they were)... and upstairs on the opposite side from Miller's (above the Gilt Edge Bar) was originally a huge ballroom!﻿ 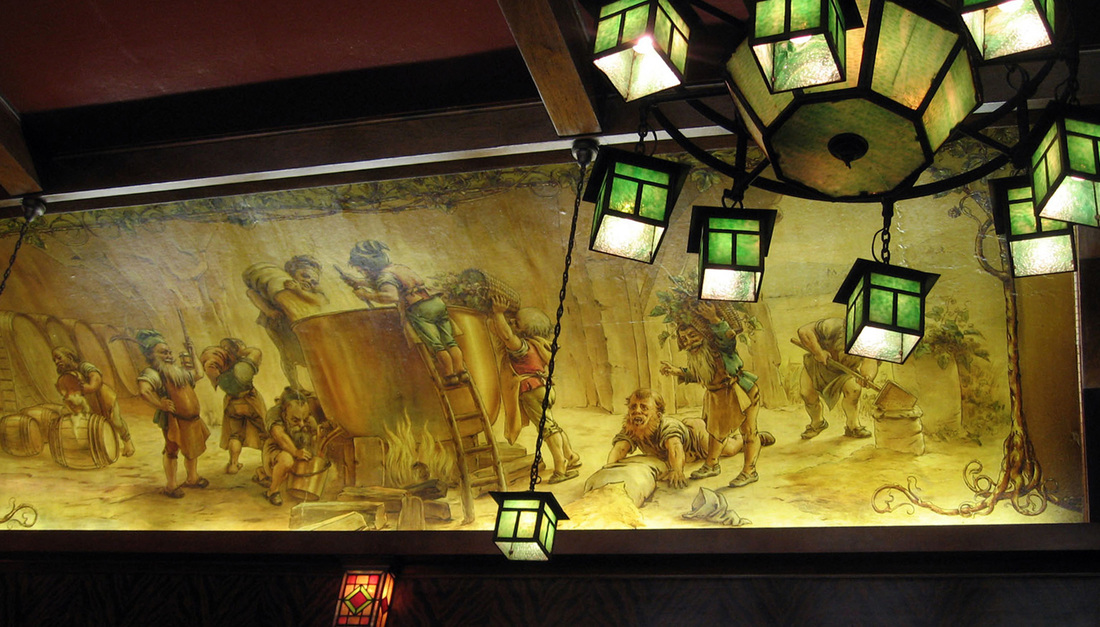 During renovation work (while restoring the old coffered ceiling) we found remnants of the murals that used to hang in the Gilt Edge Bar ~ finally answering the mystery of where the Ambassador's murals originally came from.  German born (and Milwaukee based) artist Franz Edward Rohrbeck (1852 - 1919) was commissioned by Bosch to paint murals that coordinated with the coffered ceiling ~ next time you're in Houghton you should go get something to eat at the Ambassador (just a few doors towards the bridge from us) and admire the paintings (along with their other aesthetics and great food!).  Photo above is in the Ambassador Restaurant. 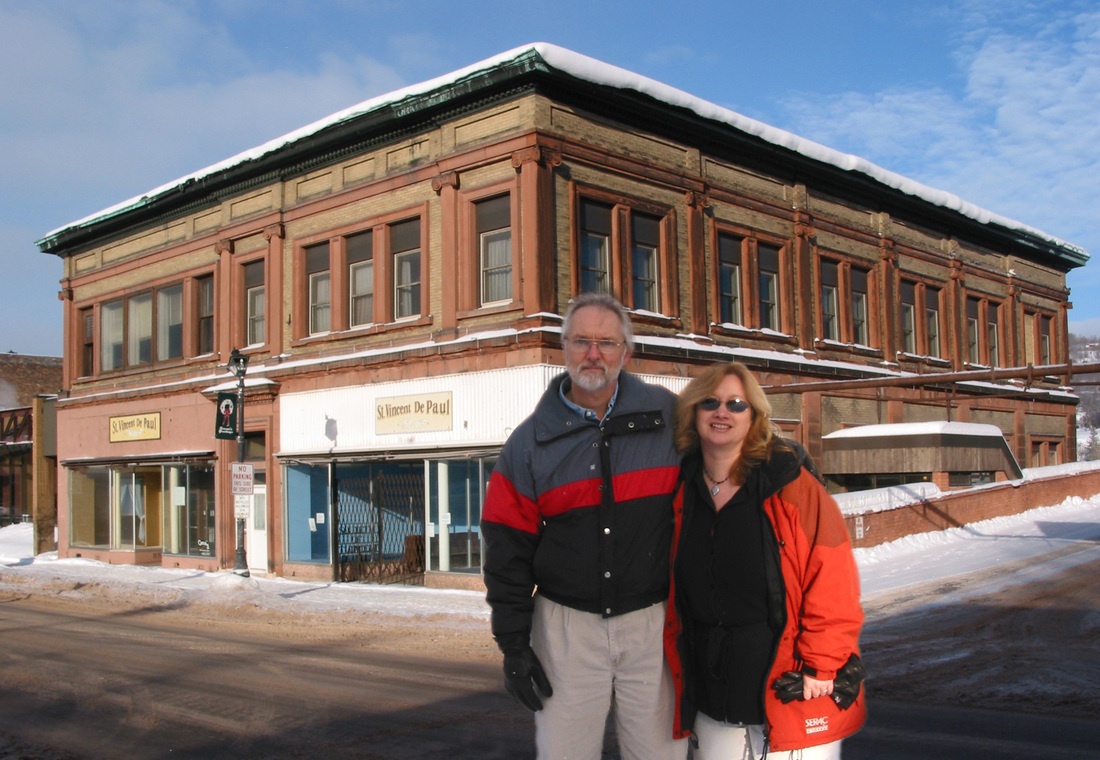 2005 we bought the building ~ our printing company had more then outgrown the building we were renting down the street, and this is the only building in downtown that would work for us (a storefront on Shelden plus tons of parking on the deck behind it, with loading dock on Lakeshore Drive, and enough square footage for the shop to expand, plus the bonus of rental space)

Click on smaller images below ~ they are links to more details 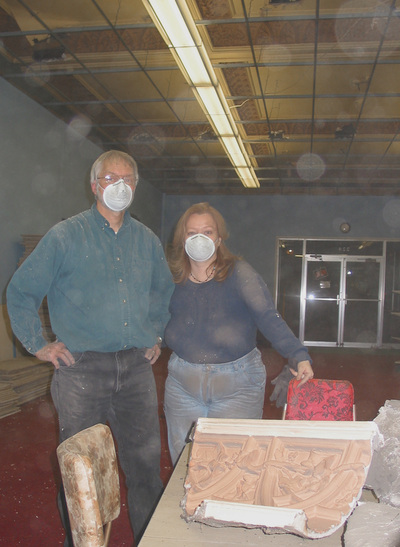 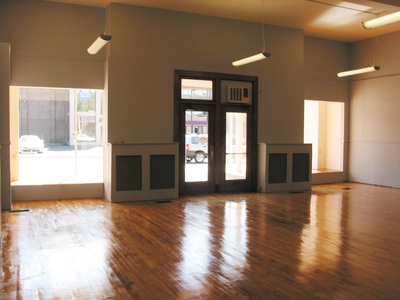 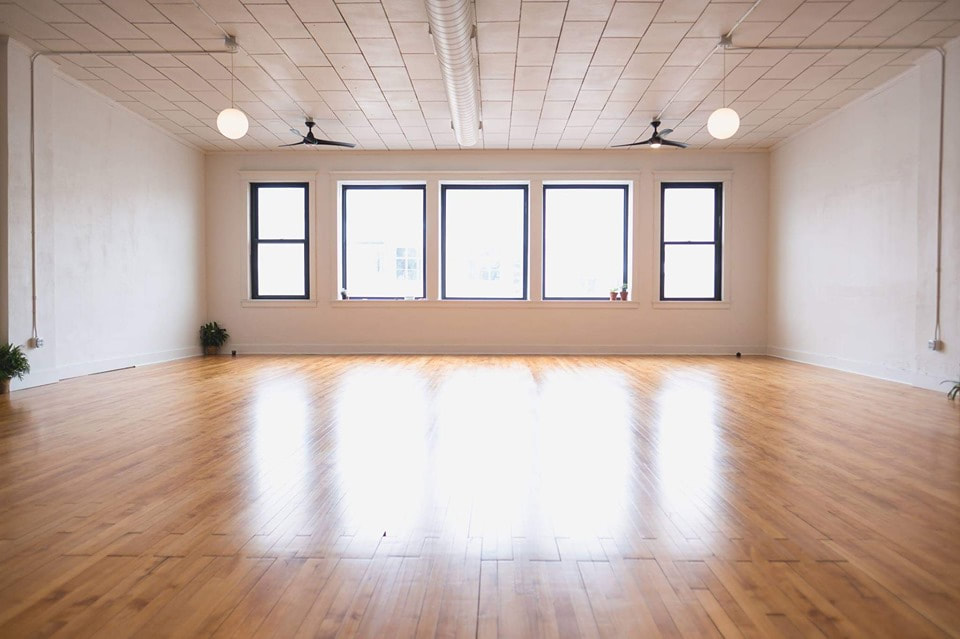 Recently Renovated!!
More history...
We have been told that JCPenny took over the Miller Department Shop space at some point (before they built the Gazette's building, which was before they moved into the mall), folks have reminisced to us how they remember going there as a little kid, and described how that weird middle section in the ceiling was actually wide open with railings around it on the top floor, and a cable system with a basket went from the clerks desk on the main level, up to the managers office on the top level.  Shoppers could avoid going upstairs as the clerk would send the basket up with a note requesting socks (or whatever else was up there), and how money was not handled by the clerks, but only in the managers office (so you'd give your clerk the money, they would send it up to the top floor, and the basket would come down again with your change).

During prohibition the Gilt Edge Bar was closed (and the murals now at the Ambassador were taken down from public view, as images of drinking were also illegal)... and it reopened in the basement as a speakeasy! Next to Pure Foods Co. was a butcher shop where folks would enter the building and then proceed to an interior door which still has the peephole to the speakeasy ~ if the bouncers in the bar could see that you weren't "coppers" they'd let you in ~ or if you were they'd sound an alarm and patrons would vanish out by various means... we heard how the bartenders would escape through a little door that was behind the bar that took them into the boiler room (door is covered from our pressroom side, but can still be seen in the now unused boiler room) where they would then proceed out into the coal bin room that was under the sidewalk and go up and out through the metal trap doors to the outside...  others would escape through a side door (on the wall that faces towards the bridge, that has long been bricked shut) that we are guessing was hidden from view, as well as out into Pure Foods via an interior door, while others hid in the "fancy rooms" (that probably housed some ladies) which had restroom signs on them: "Boys" and "Girls" (we were told this was common in speakeasies, as the police didn't look in bathrooms during a raid)... while others took the stairs up to the Shelden level to dash off into the department store and whoever was renting in the former bar location ~ must have been crazy when the police started blowing their whistles!!

It was probably during the late 1930's or early 1940's that the ballroom was converted into 2 large apartments (which went through further work during the 1970's and 1990's).

The destruction of the coffered ceiling and large display windows being added supposedly came about when that space was modernized by the gas company (who sold appliances back in the day, along with the gas) ~ guesses are this was done during the 1950's. Pure Foods Co. gave way to a tire shop at some point, and the storefront was replaced with an overhead garage door.

The space where The Print Shop currently has it's lobby was home for many years to Kukkonen's Hallmark (before they moved to the mall) as well as St. Vincent DePaul's resell store. The storefront that is currently rented by Year-Round-Gear is remembered by some as being home by Weber's Men's Clothing Store (before they moved across the street and down a block to what is known as the old Weber building, which currently houses the pawn shop/shipping shop).

If anyone knows some of the history of our building please pop me out an email and share what you know and how you came to know it ~ and of course any stories to go along with that!  billyjolits@yahoo.com is a good address to email that to.